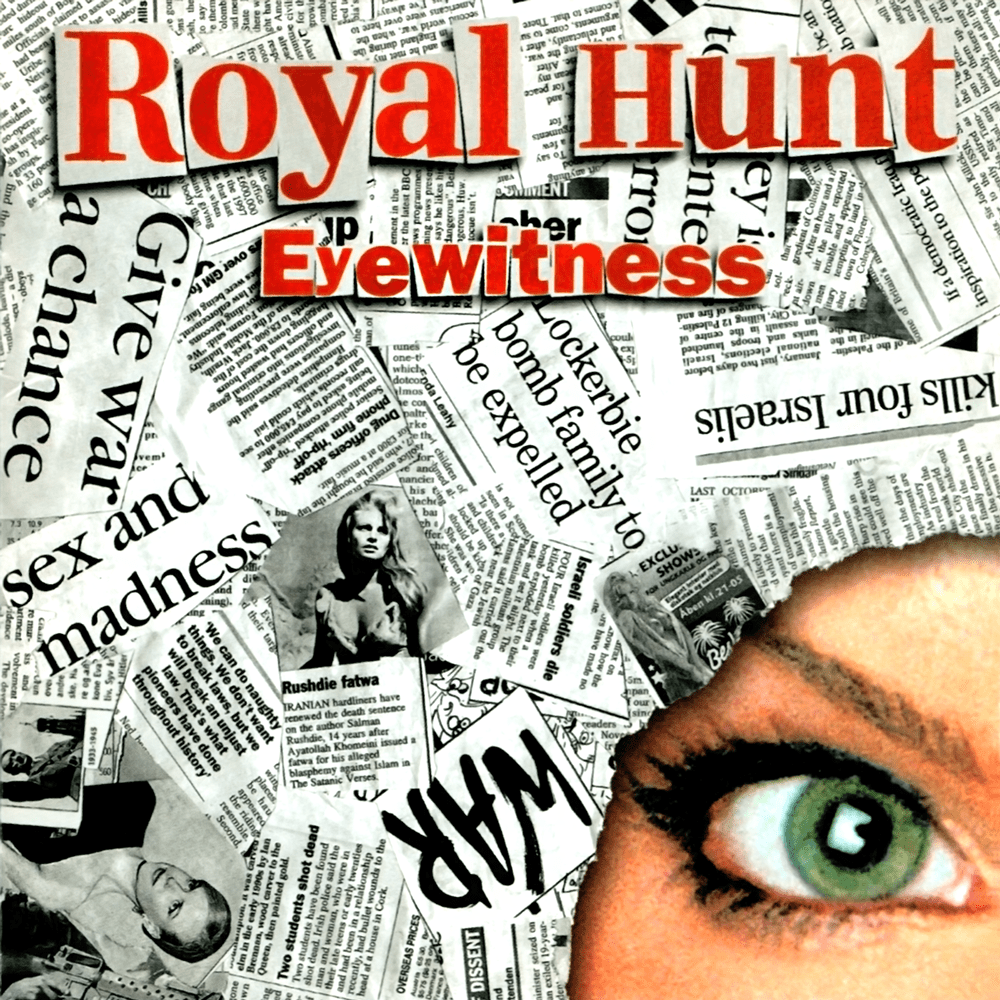 Get it on Amazon
Get it on iTunes
Stream on YouTube

Facing every window, ’round every corner
TV eyes are up and running, no one’s gonna tell
why nothing’s ever sacred, nothing’s ever private
Everything’s exposed and all our values shot to hell

But no one seems to know which reality to show
Hunted, we’re hunted down

Catching any moment, taping every sentence,
watching from above – some kind of legalized abuse
Any given second, every single minute
analyzed, categorized for any later use

Still no one seems to know which reality to show
Hunted, we’re hunted down
Hunted, I’m hunted down

Kind of faraway country,million miles from our homes
Have no reason to be here – now, see how it goes
Sharing “wisdom and progress”, but we’re armed to the teeth
escalating this madness – tell me, why can’t we leave?

Every inch of their country we’re proclaiming as free
’til the last of the natives have no places to be
Educating with fire, liberating with steel
pushing repatriation – do we care how they feel?

Why God took you away? He forgot me along the way,
far away… Oh, but I’ll pray

You rogot me along the way,far away
but I will pray

The Edge Of The World

Learned how to steal since that day – God, who knows?
Next scene : I shoot – cop’s dead – boy, is THAT news…
“Big House” is waiting. You know how it goes –
sometimes you get the bear, sometimes the bear gets you.
Now I’m in pain – not a man, just a file,
biting my nails in the “Dance Hall” all day
Edge if the world’s down that very last mile
where “Old Sparky” is waiting to fry me away

Talked to our priest, asked him – “Sell me your God
Is there a reward for being nailed to the cross?”
Son of the bitch kind of shrieks, than he laughed :
“If you’ll make it to heaven, my son,
the pressure is off all the rest of us”
Killing is easy – I’m chained to my bed,
State pushed the button and murder’s fulfilled
“It ain’t no murder” – this old guard just said –
“good folks got murdered – white trash’s just dead”

Empires were built through the centuries drones
on somebody’s flesh and on somebody’s bones
Creating our needs while dumping what’s left –
now nature’s dying, it’s choking to death
Tell me for how long

As we’re gaining strength – the world’s getting week
We’re blowing away the remains as we speak
Another decade, we’re pushing some more
Destroying the walls while we’re closing the door

When the forest turns to desert, when the river turns to mud,
When the air becomes a treasure – who allowed to tear it all apart?

Caviar and champagne, big golden rings and expensive cigars
Sweaty butts on a couch which cost as much as ticket to Mars
Phony smile… Those eyes as they pay unbelievable price
for the right to decide what to do – for me and you
House in France and a Benz –
you see, the whole world’s right in their hands
Such a waste – Wicked Lounge’s a happening place.
Balding guys – filthy rich and every one’s such a son of a bitch
Country’s sold, country’s bought.
They’re trading wars and can you tell me why not?
Write a check – or a pass? It’s just as easy as scratching your ass
What is right?What is wrong?
Pay the price and it won’t take too long
to decide what is right thing to do – for me and you
Maybe this makes you sick
You see, the point is their wallet’s too thick
Such a waste – Wicked Lounge’s a remarkable place
Dearest God, please get pissed –
I’m sure that none of these jerks will be missed
Such a waste – Wicked Lounge’s a wonderful place

A week to build the world – and now you’re leaving
Do you ever see the cards you’re dealing?

Many times your ways are strange’n shallow
Makes me wonder if I’ll ever follow you
Take that kid I’ve seen around, crying
Everytime I passed him felt like dying – but just a little bit
Trying to understand by whom he’s hit

Look like kid;s been taking quite a beating,
maybe loved the hand that did the hitting
I’m sure the guy’s so proud to be a father
and his son will live just like another one
Growing up in jail. Father,can you alert us when we fail?

Help us, God – help us find the way, save us
from ourselves – take that pain away.
Listen – help us, God

See, he never will forgive the hitter
Life just slipped him a pill – and it tastes bitter
Growing up in middles vino’s talking
he will be convinced that he is walking
while crawling on his knees, hoping this is the only way it is

A perished smile, a hidden tear
that sends a shiver down the spine – of joy and fear
A hasty move, uneven step
This show is on – you’ve learned it inside out, to death

A silent sigh, a stolen kiss
it’s all – the miracle of life and goes like this
An empty stare, a final scream
It’s live a never ending soap – or so it seems

Look what’s going on – you are my witness
On the silver screen – my eye witness.