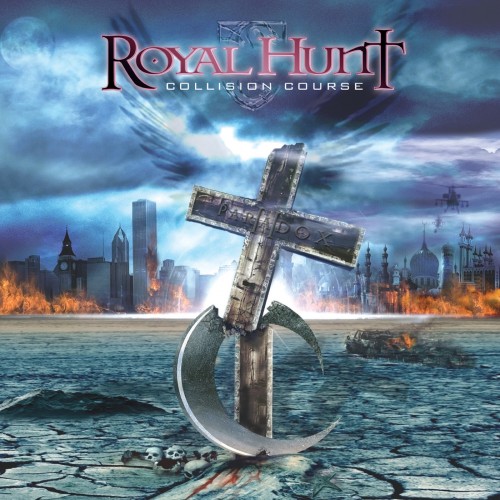 “The album alternates mid-tempo with faster more bombastic songs, all of them having the progressive elements and breaks that made the first Paradox such a treat to listen to. There isn’t a single boring moment on this album, it starts with a nice (and long) intro and kicks-in with a killer song (The First Rock) and then ends with brio with an awesome tune that makes you long for more. Maybe we’ll see a Paradox III one day, who knows. As long as its made as brilliantly as this one, Royal Hunt can line up this types of album as much as they can / want, I personnaly wouldn’t mind”. // Chris of Metalreviews.com Score: 90/100

When did it all go wrong? How could we let it go on for so long?
Who did that first mistake? Who took the first step and who’s been
awake but silent?
Churches were built by men, driven by love that we all understand
Since millions of lives’ve been lost… kneel for the moon or kneel for the cross.

In the beginning there was one and only God, you see – all said and done –
the only one you chose to rule the world
But then… as time was passing by you kept – without even knowing why –
re-entering new faces to the fold
So was it progress or regress? A bunch of them created such a mess
inventing laws all written gold on gold

“From now on one icon leaves no room for others”

So now we’re back – a single face in every corner, showing holy grace,
demanding bigger palace – worth the king
We’re working hard to build it right, we’re slaving every day and every night,
just dying to complete this bloody thing

Higher, higher… we can’t stop. The tower’s getting higher

Build a perfect house of light on our flesh and bones
to keep a sacred image under lock and key, but
every single dream we had kept ending in the mud
when we replaced religion with the rock…
the very first mistake – a simple rock.

Inferior gods must be gone… tomorrow there’ll be only one.

It’s been around for a while… that sign of a new beginning
I tried to let it all slide – no way, my mind keeps spinning
Some of the choices I’ve made’s been haunting me forever
as trying hard to persuade me to regret. However:

Loneliness is grieving over what you are and then discover
who you were… or used to be… and now it seems so hard to understand
Give me strength to be who I was, recreate the ones whom I lost
down the road – so hard and lonely – please forgive me now for who I am

Ships arriving to a very distant shore,
breeze is playing with flags it’s never seen before
Moving closer – a bunch of soldiers and a priest,
getting ready for a sacrilegious bloody feast

half-moon, a cross… who cares which one of them it was?

Welcome to the world of hate and desperation,
get inside and choose your pain… We will
ram it down the throat of every single nation
That’s the way – divide and reign

Churches’re burning… was it colour or their shape?
Does it matter? It does to ones who didn’t manage to escape
Listen closely – winners are gone, they had their ball –
from the ashes I hear retaliations call

They won… or did we? I’m pretty sure it wasn’t meant to be
half-moon, a cross… who cares which one of them it was?

It’s all a blur but I recall: I’m looking up and hear your call
“the perfect war – no war at all”… it’s hard to swallow
A night will cover the battlefield to hide them all – the ones they killed –
and all I see and all I feel is rage and sorrow.

5. High Noon At The Battlefield

Touching the ground, feeling the pain below…
How did it end there? Wish you’ll never know
Guarded by this soil as if it was a shield:
you see, it’s high noon at the battlefield – I left my fear behind –
a peaceful high noon…

But not so long ago the wind was strong and freezing cold
while blood was running down that hill
A war like this – you mark my words – can not be put on hold:
we’ll keep on welding our steel
Do you believe that horrors from our distant past
will ever make us change our mind? No way!
Forget the fallen ones – we’re in to have a blast,
so all in all we’re doing fine.

White cape, red cross… hands up to cheer The Big Boss
No life, no love, no thoughts, no brains to speak of:
“Stand tall, divide the whole world in black and off-white!”
You’ve got your plan… God bless you losers and your Clan

The day will come… lights out – and soon you’ll be gone
Who’s left? Your son… The only thing you’ll pass on:
“Kill a nigger, kill a Jew, kill a couple, kill a few”. Alright –
no more, no less? He’ll put you to rest while going:

Raise your glass and hail The Clan
feel united by your colour
Raise hell just because you can,
burn a cross… and one another.

7. Blood In Blood Out

I thought that the madness was over as echo of a last bloody war
was fading away, but discovered a new breed of fools on the way
to steal their fair share of headlines… in “Whatever Times”
over and over

For some unexplainable reason there’s always a few of a kind
who’d put their beliefs in a prison of highly deranged, vicious minds
Praying away for a bigger and stronger empire to surface the Earth,
coming back from the ashes to set every nation on fire…
Blood’s on your face and all over the place as

you’re hiding, you’re lying – disgrace is worse than dying,
keep falling much lower ’cause it’s so far from over
The war cry’s returning (remaining bridges’re burning)
you’ll hear it – we mean it – so clear and loud:
“Blood in blood out!”

Who could have believed or expected, who knew all along that today
Dark Ages will be resurrected – now look at yourself, go on!
Wait for Messiah to save you and show what to do, follow
millions of desperate rebels without a clue what are they fighting for,
asking Almighty for.

See it coming… blood in blood out.

While all of us walk alone… no help, we’re on our own
The end – as they say – is a heartbeat away,
so give me a reason to stay…

Roaring silence…you walk down the street in Belfast –
think of it as every step that you take is your last…
It could be, easily, just keep on watching your back:
highest alert all the time – you are under attack,
better keep moving

Rain’s falling down on me as trying to make me see
the scars of this town. Just leave it and run
surrounded by tears of the sun

Shot in the distance – and fear bounces back from these walls,
someone ahead of you screams and suddenly falls
Killings are random but there is a reason behind
Retaliation? Well, half of the nation went blind

while children in church are singing so peaceful,
bells are ringing a lovely tune… I’m going mad!

Ways of beliefs were written down to please you:
saints, common thieves – each one his own to pick.
So why – can you tell me – your breed’s inventing something new?
Holy war? Now I see – a sacrifice a week
Infidels way: live – let live… how can you resist
sudden urge to blow them away?

No – we’re aware, your war’s to get attention…
how could we dare to turn the TV off?
Raid (suicidal) – your humble share in a world’s perfection
You’ll meet – time is right – your idol and I hope
one bullet is enough… while you’re screaming
from the top of your lungs:

Jihad! The ones who feel the pain will try to stop “the rain
of terror”, it’s insane… I hear them screaming:
Jihad! I know who it might be: nobody else but we,
the ones who hold the key…That’s all they need:
Jihad! And as the time goes by we’ll look upon the sky
to ask the question: “Why they keep on screaming
Jihad?” They’re just a hostile breed that bites a hand that feeds
and loves to see it bleed – it’s just a hostile breed

That cherish hate based on fear – that their religion can inspire
nowadays. All we hear is: “Jihad!”

The chaos keeps on raging, still hungry for a thrill –
whatever script we’re staging:
holy book’s kept close to the gun – now fire at will
The cast is ever changing to reinvent its skill –
no soppy happy ending:
in the name of some God – just fire at will