How to progress and yet keep the identity which took over 25 years to establish? How to create the ever evolving – and at times rather complicated – musical compositions and wrap it up in an accessible format with that recognizable sound? Royal Hunt does it with ease and now – with their 14th studio album – proves once again that creativity and staying true to yourself can work hand-in-hand and produce some astonishing results: will you please welcome the ultimate proof of that – “Cast in Stone”... Royal Team 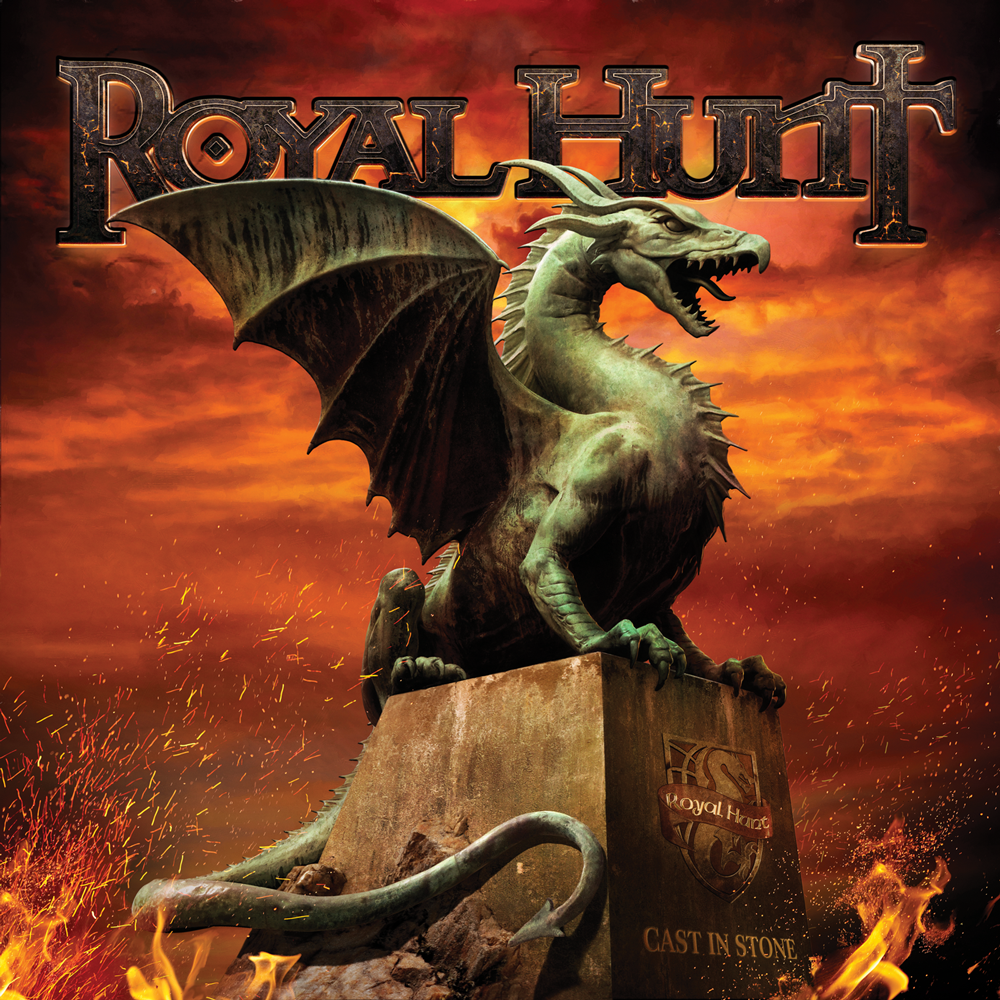 André Andersen: "This album took a while to complete… mind you, between the very first idea and until the final mix we did two tours and released two live-albums… so this one´s been in the making for quite some time. In a way it´s been very practical: you could work on it for a while, than go on doing something else and then come back later to re-evaluate what´s been done before. As a result all songs on the album are solid and well crafted, showing every aspect of Royal Hunt today: originality, catchy hooks, strong melodies, great musicianship and larger-than-life production. On that - the production - we definitely did quite a job: all the vital recorded parts were done in analog as well as the final mixing/mastering so there´re no “loudness wars” in-sight; no brickwall limited, over-compressed, lifeless wall of sound… the album breaths just like a real rock album should. I could also go on for hours praising everybody´s contribution – musicians and singers alike - but as my opinion will inevitably be very biased, I would prefer to leave the final judgment to you… after all this album´s been made for you to enjoy (although we´re enjoying it immensely ourselves at the moment)" "Cast In Stone" is out now in Japan on King Records, and worldwide - on our own label NorthPoint Productions

Press about "Cast in Stone"

Already joined the campaign? Log in with your e-mail here to see full video updates:

We would like to share the joy of playing in front of such a great audience - enjoy the video update – full show, view from stage. For more photo and video updates follow us on social media. We would also like to express our gratitude to Dmitry Nikolaev´s “StroiService” and NCA crew for a great festival experience, to our peers HammerFall, Within Temptation and Accept for a fantastic atmosphere of camaraderie and tons of mindless fun and to thousands and thousands of rock fans who showed up in Kemerovo and helped creating this truly rock event – thank you all and hope to see you again one day.

Some more pictures from @rockherofest \m/

The long-awaited vinyl version of ”Cast in Stone” - limited edition - has been released. "Cast In Stone" has been pressed on lizard green vinyl limited to 350 handnumbered copies. Right now it is being sold as a package in our webshop. View more images:

The long-awaited vinyl version of ”Cast in Stone” - limited edition - is now available in our webshop. First batch of pre-ordered items will be mailed out already tomorrow. "Cast In Stone" has been pressed on lizard green, dragon skin vinyl limited to 350 handnumbered copies. It is being sold as a deluxe package including: ⠀ ☆ LP re-mastered especially for vinyl; ⠀ ☆ poster SIGNED by ALL members of Royal Hunt; ⠀ ☆ 100% embroidered golden patch 10*9cm; ⠀ ☆ 12*12cm logo sticker; ⠀ ☆ guitar pick; ⠀ ☆ digital download of the album (original version) arrives immediately to your email; ⠀ ☆ 40% OFF your next purchase.

To all of you around the world - Merry Christmas and a Happy New Year! 🎄🎅🎉 Once again we would like to thank our fans.

To all of you around the world - Merry Christmas and a Happy New Year! 🎄🎅🎉 ⠀ Once again we would like to thank our fans. Due to your support and appreciation this year we were able to release new studio album ourselves. Both Musically and Historically “Cast In Stone” became an important album: ⠀ ⠀ -  It is the ONLY album from Royal Hunt’s rather vast discography which has been released in Europe and NA – relying ENTIRELY on the support from our FANS. ⠀ -  We run a pre-ordering campaign where NorthPoint Productions – our home label - did administration of all related processes with a minimal start-up capital. ⠀ ⠀ -  To honour those who supported the release we made a special (deluxe) edition of the album containing an extended booklet with a THANK YOU NOTE, instrumental CD, poster, lanyard, pre-listening parties, video and photo updates. ⠀ ⠀ -  Each person who possesses the Deluxe Edition of “Cast in Stone” today - is our FRIEND who supported this release.  Without your imput this release would not be possible. ⠀ ⠀ -  There was a bunch of people who went even further: they supported with a bigger donation and their names can be read in the liner notes of the booklet. ⠀ ⠀ -  A few copies of the Deluxe Edition can still be found in our webshop - though video and photo updates are NOT AVAILABLE  anymore – You snooze, you lose! 😜 ⠀ Don't snooze in the upcoming year - follow, LIKE and Comment our updates, buy our releases - your support is important - look what we have already achieved together so far! ⠀ #heavymetalchristmas #metalhead

We've been going through the last tour´s video and photo material: one of the highlights was Ripollet Rock in Barcelona. Great organization and a very enthusiastic crowd (including a few familiar faces) – what else could any band want? Oh yeah, also an outstanding catering and nice weather (with occasional lightning strikes in the background). Enjoy! - https://youtu.be/POkuQTpot5o

We're excited to present the re-mastered version of our debut album – "Land of Broken Hearts" (Special Edition 2018) out on the 15th of August (NorthPoint Productions). It includes an extended booklet with rare pictures, “the making of” – story written by André Andersen, 4 bonus tracks and one previously unreleased song (recently restored/re-recorded). "Land of Broken Hearts" has previously been released on vinyl (Night of the Vinyl Dead). 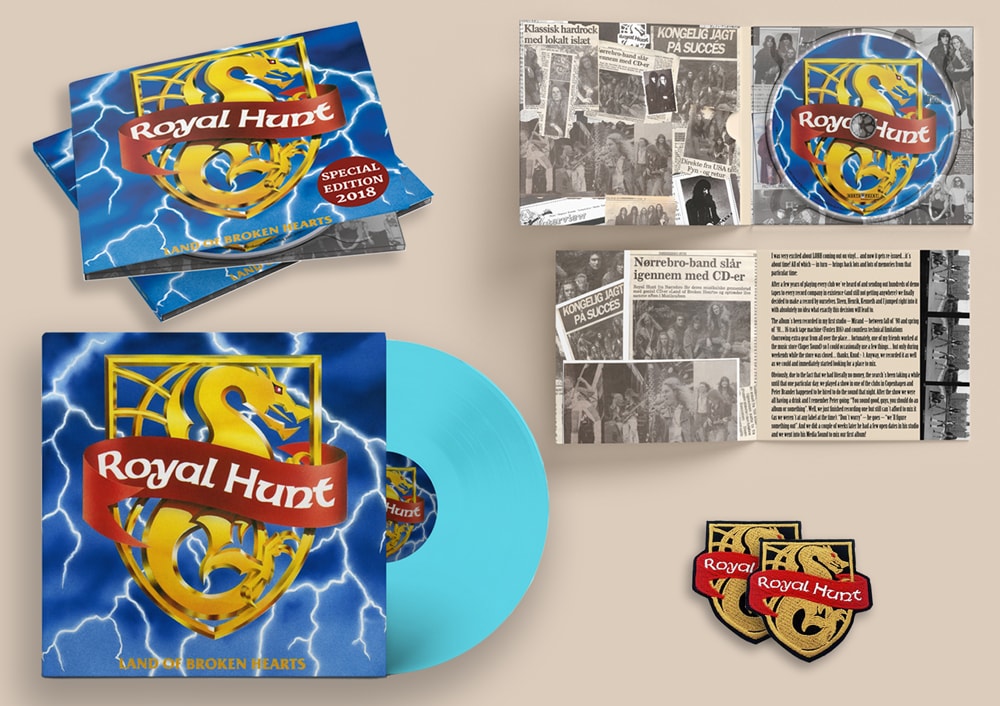 While going through the archives in search of bonus material, some raw video footage was found which was shot all the way back in 1992 but never used: the band performing “Age Gone Wild” from their debut. Now the film has been restored/edited and finally published, giving all Royal Hunt fans a unique opportunity to re-discover this once lost and now – fortunately – newly found gem

We are excited to present the new lyric video for the song "The Wishing Well" from our latest album "Cast in Stone". Watch a six minutes musical rollercoaster accompanied by stunning pictures from the latest concert in Moscow by Serge Adamovich – all skillfully put together into one hell of a lyric video by Bernard Kellerer from Rocktopia.co.uk. We will play the second string of dates in support of "Cast in Stone" later this summer: 24/08/18 – (ES) Barcelona, Ripollet Rock Festival 30/08/18 – (DK) Copenhagen, BETA (Amager Bio) 31/08/18 – (RO) Campulung, Posada Rock Festival   Subscribe to our YouTube Channel: bit.ly/YouTube-Channel-RoyalHunt

Enjoy the weekend and listen to the brand new interview with André Andersen by The Metal Gods Meltdown - IT RAWKS! 👿

André Andersen has been interviewed by our good friend and Japanese fan club representative - Hugh - about interviews and interviewers. Japanese translation can be found below. Enjoy! - royalhunt.com/interview-japanese-fan-club

We're now back from our mini tour - the awesome shot below (by J. Kuznetsov) represents it perfectly: everybody in the house having fun! Enjoy some videos from the past shows on YT - https://youtu.be/Mnb4hpkEhQk Check out the NEW SONG at Land of Broken Hearts.Story Take care and Subscribe to our YouTube Channel: bit.ly/YouTube-Channel-RoyalHunt \m/ Hello, we're in Copenhagen, Denmark right now rehearsing for the upcoming shows. Hope to see you next week!

We´re happy to – finally – be able to present a video clip for the song “Fistful of Misery” from our brand new studio album “Cast in Stone”. The video was made by Kenny Rander, filmed in familiar surroundings: at Media Sound Studio, owned and run by our dear friend Peter Brander… the place where a long, long time ago (27 years to be exact) our debut album was mixed. Hope you like the song and the video – enjoy! https://youtu.be/ic3vvmOp9U4 Subscribe to our YouTube Channel: bit.ly/YouTube-Channel-RoyalHunt

Welcome to the behind the scenes of the upcoming video clip "Fistful of Misery".   [Order Deluxe or log in to watch full video]

The release date is finally here, so while your physical copy is on the way - why wait any longer? Log in to get your free download of the album right now in the store - royalhunt.com/store (You should be able to see the downloads after logging in). As you can see...we also prepared a special dish for the release party... While “Cast in Stone” keeps getting fantastic reviews across the board we´ve been made aware of the fact that its darker, deeper sound we chose to use this time might not come across clearly enough while played on some less advanced sound systems (and maybe not all of us love that warm, analog-tape-based sound),  we decided to include a lighter/slimmer mastered version of the album as an extra bonus for all who order from us directly. Enjoy! First copies have arrived and we will begin to ship them right away. All digipaks and box sets look great and are soft-touch, which is a great bonus for all who order a physical copy. Yes, we've been trying to please all kind of senses - sound, sight and touch - so next release will probably taste good and smell delicious. Jonas in the studio - watch and listen to a 1.30 min guitar solo he recorded:   [Pre-order or log in to watch full video]

We're just back from the Media Sound studio, shooting is done, we're all tired but happy \m/   [Pre-order or log in to watch full video] Hi we're in sunny Copenhagen, going' to shoot a video tomorrow. We've been discussing a setlist for the upcoming shows in April, would you write your suggestions?